Solo project - original songs & music written by Alice, and some of the slightly more obscure jazz and folk numbers of the first half of the 1900s. 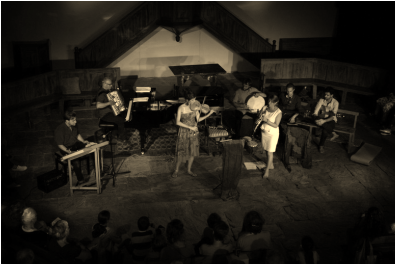 Alice leads this collective of highly diverse musicians, based primarily in London.  Their repertoire focuses in particular on folk dance, from many corners of the world, from klezmer to flamenco, tango to salsa.  They have a bright, positive & energetic edge with this foundation of danceable rhythms, but always giving reflective space both for performers and listeners.  Often thrown unexpectedly into their performances are moments of instrument-switching and tango-dancing. Their warmly eclectic and embracing ethos is strongly reflected in the vastly broad-minded, international and versatile mix of musicians who play with the group. 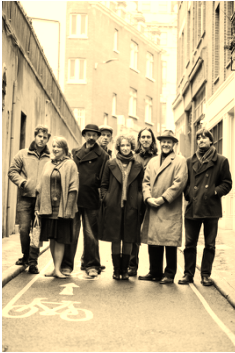 Since its inception over ten years ago The Kings Cross Hot Club has evolved into a unique collective of musicians, with a focus on Gypsy swing, jazz manouche and swing musette typical of the period 1925 to 1950.

Alice has been solo clarinettist and vocalist with the group since 2012, performing with them all over the UK, in some of London's top venues & clubs - including The Garrick, Savoy, 100 club, The Hideaway - at festivals such as Twinwood and the Secret Garden Party, for swing & balboa dancers, live painting events, cinematic experiences, at the Olympic Torch Relay (London 2012), for a theatre tribute to Edith Piaf, and much more.

A recent & exciting collaboration is with Senegalese singer Biram Seck and his band Jant.  Alice and Biram have experimented mixing the sound of Biram's songs with the mellow lines of clarinet and viola to create, in Biram's words, 'a truly classical African music'.  With his husky humble tones leading the sound the listener is in for a very earthy yet uplifting, transcendent experience.

Biram has had much success as a vocal artist - with his first WOMAD appearance back in 2003 with Suuf, the Bristol-Dakar project that was signed to BBC Radio 3's Late Junction Records - as well as with the fantastically spirited sounds of band Fofoulah.

He has continued to find that the musical sensibilities of Bristol form a chemistry with the influences he brought from his home town of Dakar and his family's griot roots in the Fouta region of northern Senegal.

As he says himself: "I would like you to consider my songs appeals for unity, education and civilisation. I love music because it is a means of communicating ideas to broaden minds and build an integrated world."

Corina Kwami is a singer and entertainer who is influenced by the sounds of jazz, soul, and funk and stories of contemporary urban life.

She released her first single, 16 on 25! in 2014, featuring Alice Mary Williamson on clarinet. The song is about learning from life's many mishaps and misadventures and having the courage to welcome life's surprises. Written in London and inspired by jazz and latin rhythms, it is about going to a new place and absorbing stories.