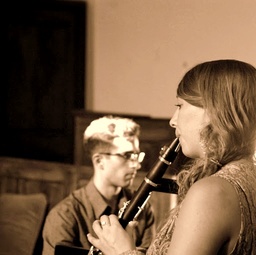 This love of cross-pollination has bled strongly into her approach to music - as a performing musician her influences and interests are wide-reaching.

Since 2012 she is solo clarinettist, vocalist, accordionist, band leader and arranger for Gypsy swing/manouche band The Kings Cross Hot Club. Aside from this, her varied experience includes leading the multi-cultural group Ama Bazar as a clarinettist, vocalist and dancer, performing & collaborating with London-based Turkish singer Djanan Turan, playing in a Javanese Gamelan orchestra, working with tango dancers and musicians across Europe, leading klezmer band Black Shabbat, recording and performing with Congolese musicians Mulele Matondo Afrika and David Lessie, Senegalese singer Biram Seck, as well as a variety of folk and indie folk groups at a number of London venues and UK festivals including KOKO and the Royal Festival Hall; Secret Garden Party and Wilderness. She has also worked as a session musician for BBC Television and for several independent composers/bands.

Her playing style has a Balkan quality - reflecting her half-Croatian blood - sweet melancholy combined with a feisty energy.

As an enthusiastic amateur visual artist Alice has provided artwork and photography for a variety of projects - for The Starry Messenger film and composer Giles Swayne (providing photo portraits in 2009 for his website and numerous public profiles including publishers, festival listings, catalogues etc.).

As well as teaching clarinet and musicality to a wide range of ages, Alice is clarinet tutor, arranger and workshop leader for charity Play for Progress, who provide therapeutic music and arts sessions to unaccompanied minors seeking asylum in the UK. This has involved arranging music & leading workshops for public showcases at Victoria & Albert museum, Royal Festival Hall and Queen Elizabeth Hall - in collaboration with Aurora Orchestra & Ed Gardner/London Philharmonic Orchestra - in addition to weekly teaching, writing & recording sessions with the Refugee Council. She has worked with Eugene Skeef, in a collaborative writing/rhythm/movement project with Play for Progress and assisted Rachel Leech at Spitalfields Festival in several music devising workshops for young people in Tower Hamlets. Between 2012-2015 she ran music/arts workshops for disadvantaged city children with the charity Kids Company. These sessions were primarily music-based but covered a range of topics from rap and poetry to story-telling and dance.  Alice is an active tango dancer and has studied circus arts in London alongside dance.
Powered by